When you want to be the best karaoke singer, you don’t want to be stuck largely to the microphone stand because the cable only runs so far. With a wireless microphone for karaoke, you can venture out a greater distance and the microphone is also better balanced in your hand too, which is an added bonus.

Some wireless mics broadcast to a smaller receiver with a USB port on the end of it. Others have large receiver systems that get sold with the microphone to make a complete set. There are single mic systems and ones that handle multiple microphones that will plug into the single speaker setup and allow for a duet or a group to sing together on stage. There are also plenty of standalone Bluetooth mics that come with their own speaker and plug directly into a smartphone.

With broadcasting, this is either analog or digital signals. Analog still exists here because it’s much cheaper and sometimes has a greater range. With digital units, they may use their own wireless network broadcasting capability, use standard 2.4Mhz Wi-Fi that your wireless devices use (which can sometimes get congested) or more commonly, Bluetooth.

It’s fair to say that there are pros and cons with each broadcast option; it’s a good idea for buyers to consider how they will use the microphone to ensure they choose the right wireless mic for them.

The BONAOK Wireless Bluetooth Karaoke Microphone is designed to be a flexible unit that works with various systems because of its Bluetooth capability. The mic comes in 8 different vibrant colors including rose gold that is sure not to go unnoticed in your hand. 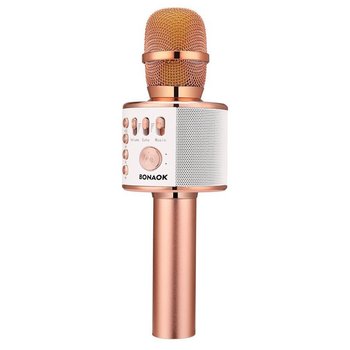 The microphone uses both Bluetooth and also a wired connection to a standard full-sized USB port into a laptop or Mac PC. However, with Bluetooth, it will happily connect to an iPhone, iPad, Android smartphone and tablet, Sony system and other devices too.

Music is received through the connected smart device, and the speaker on the side of the microphone plays the track while including your vocals.

With the broadcast range of around 33 feet with no obstacles in its path, the range is good. Staying within 15-16 feet is likely to avoid disruptions and possible cutouts and will drain the battery less. The battery is rated for 5 hours but will give less life most likely when staying a greater distance from the connected device which acts as the receiver.

A power button and multiple smaller buttons on the side of the mic let you skip tracks, boost the overall volume, adjust the music volume, add a reverb (echo) sound, the duration of the echo, and has other features too.

There is a microSD card slot with a 64 GB capacity (card not included).

The Pop Solo by Tzumiis a dedicated karaoke microphone that includes a built-in mixer to add extra dimensions to the singing. The mic has a convenient smartphone holder (good for 6-inch wide smartphones) to look at while holding the mic below it. The mic is rose gold color with a white box and a gold trim, with rose pink mic grip.

The grip has several buttons for power, volume adjustment, and reverberation.

The Bluetooth is compatible from 4.1 onwards. Connect to Android, iOS, and other Bluetooth-compatible devices. The speaker plays music that’s played through a smartphone.

The 1,300 mAh lithium battery powers about five hours of singing. The recording feature is powered for two hours total.

The Bluetooth range is ideally 30 feet running between the frequency range of 100Hz to 10,000Hz. The mic does turn itself off when not in use which not only saves battery life but prevents it from getting too hot.

The KaraoKingWireless Bluetooth Karaoke Microphone is a cool looking mic with a bright mic head and a wealth of features. Singers can adjust the bass and treble levels, the music volume, mic volume, and amount of reverb. There’s also a smartphone holder to see the song lyrics while singing too. 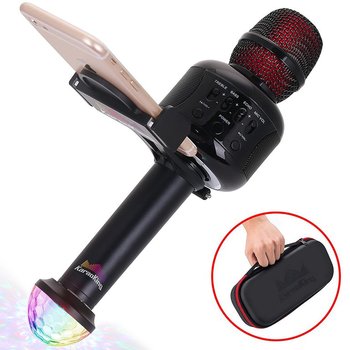 The mic comes in three main color themes (black, gold or pink). A multi-colored disco ball at the underside of the mic lights up the ground while singing. The mic recharges using a USB port.

The 2,200 mAH battery supposedly powers the mic for singing up to 8 hours, but for most people, it’ll probably manage less than that without breaks. There’s a 5-watt speaker built into the mic’s body that plays music over the Bluetooth connection.

The Nequare Wireless Bluetooth Karaoke Microphone is designed for both iOS and Android users. There is a switch on the side to change modes from Android to iOS and back again. There’s a treble, bass, music volume level, mic volume level, track forward and back, and phone button. The mic can also use its Bluetooth feature to answer calls through a connected smartphone. 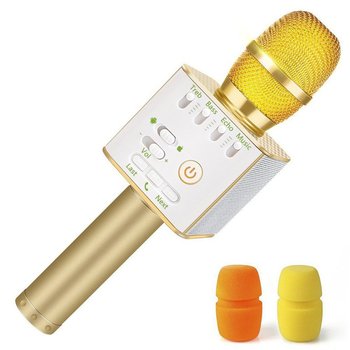 As well as connecting to iOS or Android, the mic can also hook up to a PC, Mac or Sony console. The gold color has several shapes, plus two-colored foam wind protectors are included.

The 2,800mAh battery provides 8 hours of music and 6 hours of singing before the battery runs out. The Bluetooth speaker plays music direct from songs on a Bluetooth connected device.

The Sound Town Professional Dual-Channel UHF Handheld Wireless Microphone System is designed as professional gear for use in small venues. It broadcasts on UHF with frequencies that can be chosen. There are two microphones with the system. 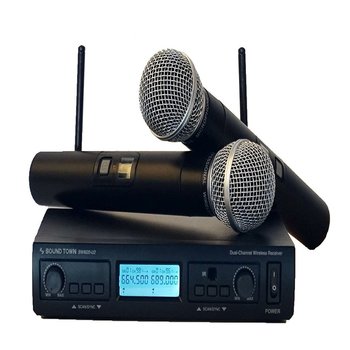 Using the ultra-high frequency system tries to avoid interference. It operates from 640 to 690 Mhz for up to 300 feet. There are two volume settings, one for each microphone. Dual-channel UHF frequency broadcast with 200 frequencies.

Quartz crystal oscillation to clean up transmission problems. With the clear line of sight, a range of 300 feet.

Professional looking microphones designed for event or PA use. Microphones and receiver clad in black with metallic mic head and LED display on the receiver.

The Moresky Karaoke Bluetooth wireless microphone connects to Android, iOS and other wireless devices. It has a range of up to 33 feet.

The mic is usable for karaoke singing, to speak to a large group, as a wireless microphone (without the singing) and other purposes. It is also designed in black with gold trim and gold buttons, so it’s not overly showy to use at business events. 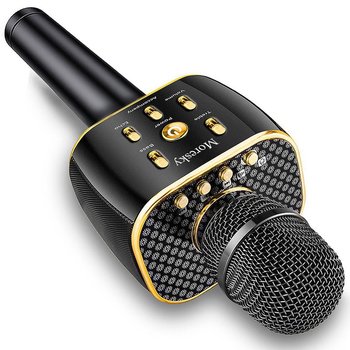 There is a microSD card slot support 64GB cards (not provided). The generous 2,600 mAh Samsung battery offers from 5 hours to 8 hours of usage depending on the rigors of what you’re doing with the mic.

The mic has gold sliding buttons for treble, bass, volume, echo, and accompaniment. It will connect to a PC or Mac, iOS or Android, and other devices. There are cables provided to charge it or hook it to a PC too, and a convenient travel case too.

The KaraoKingKaraoke Microphone H8 2.0 is an all singing, all dancing version of a Bluetooth microphone. It has disco lights in many colors along the sides to light up the area and a smartphone holder to view the lyrics to songs you’ll sing. 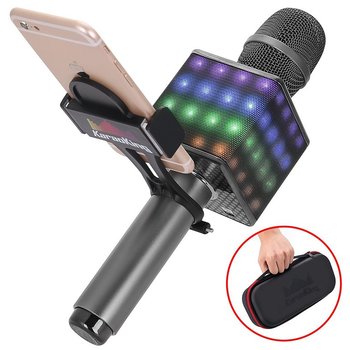 The mic works with Android, iOS and other Bluetooth-capable mobile devices. It comes in gold, dark grey or rose gold color schemes with a useful zip-up carry bag too.

The lithium-ion battery will last up to 8 hours. It is a 2,200 mAh one which is decent compared to other Bluetooth microphones. The speaker inside the mic is 5-watts which provides enough quality and power to be enjoyable in a small room.

The mic is recharged over USB cable.

The KAIYU Karaoke Microphone Wireless is a Bluetooth system for use at home, a friend’s house or elsewhere. It has a built-in Bluetooth speaker to play songs from a smartphone (Android or iOS). The model comes in Black, Golden or Rose Gold. 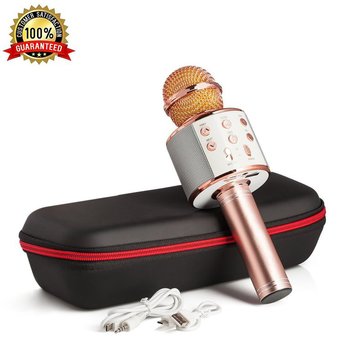 The microphone is a professional one that reduces noise by a multi-layered filtering system. It can be used for singing, playing an instrument, making a speech or another purpose.

The dual-channel speaker provides a quality stereo sound quality. There are an echo system and controls on the mic to adjust various settings including volume, echo and more.

A microSD slot with an 8GB support capacity is present to record short singing sessions.

The EMISH Wireless Karaoke Microphone is a rose gold Bluetooth microphone system designed for use with a smartphone. The speakers around the side of the mic push out music send over the wireless connection from a smartphone or other device. 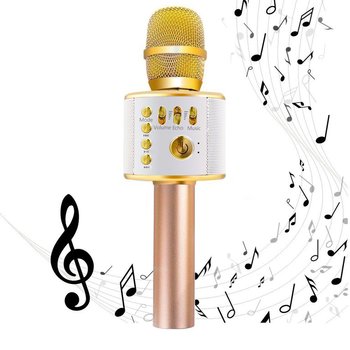 The mic and speaker are powered by a generous 2,600 mAh battery. Singing usage is around 5 hours, with standby over 20 hours.The mic’s color scheme is gold and rose gold. Clarity of sound is developed using a 3-level system to remove noise and static being picked up.

The Bluetooth has a range of 30+ feet. There is no smartphone holder, so you’ll need decent line of sight or at least to be in the same room. A 64GB capacity TF card slot is included, but no card.

The Belso Wireless Bluetooth Handheld Karaoke Microphone comes with a little more flexibility than most other wireless models reviewed above. It offers both an AUX connection and a USB one, alongside wireless.

The 1,800 mAh lithium-ion rechargeable battery runs for several hours of singing and will recharge in 3-5 hours depending on how drained the battery has become. It is a little smaller than the 2,200 or 2,800 mAH batteries in competing models. 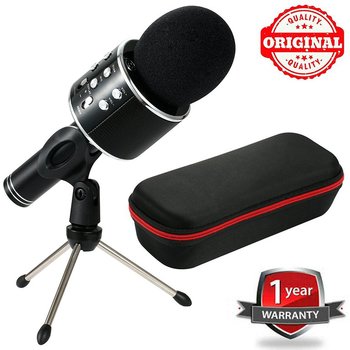 The mini stand and mic holder allow the mic to be used on a desk perhaps for podcasts or other impromptu uses; not only for karaoke sessions. There’s an attractive black carry case with a red trim provided too.

The device supports up to two TF cards which can be accessed at the same time. Earphones can be connected to listen to a song and sing (or just listen). The aluminum alloy makes the mic slick and light to hold for long periods too.

There are the usual treble, bass and reverb selective adjustments. The bass is modulated for sound quality too. There’s a chipset used to filter the sound quality to make the best of digital sound. A micro USB cable hooks the mic up to a PC to accept the recorded singing.

When choosing a wireless microphone, the first major decision is about whether you want extended range while ensuring line of sight or you’ll accept a shorter distance. VHF and UHF microphones are essentially analog ones but still perform well at a 250-300 feet distance when ensuring line of sight. By contrast, a Bluetooth or even a Wi-Fi enabled microphone will only support 30+ feet but has a digital sound. As such, with greater distance, you have to sacrifice some audio quality to achieve it.

When you only accept digital sound quality, then a Bluetooth or a Wi-Fi enabled mic is the way to go. From there, one option is to purchase a separate microphone that will connect to a smartphone to be fed songs and lyrics and play through the microphone’s speaker system. This first system is most useful in a home or small contained environment. The other option is a professional setup where the microphone feeds through to a receiver that can hook up to a speaker system at an event.

Most people learning sing at home or just wanting to have fun with the family or friends will want to opt for a microphone with an integrated speaker inside the mic itself. This is the lightest, most portable and easiest to use. Many have integrated smartphone holders to keep the song lyrics playing right in front of them if they don’t have a separate karaoke machine.