There are several theories about the birth of karaoke. One says it was born with the development of the first karaoke machine in Kobe, Japan in 1971. Others, however, insist the origins of karaoke go back practically to the invention of recorded music more than a century ago. But whether it originated a century ago in some unknown venue or during the 70s in Kobe the fact is that it wasn’t until about 30 years ago that karaoke as we have come to know it really took off.

Today, karaoke is a worldwide phenomenon that has spread from wherever it may have originated to every part of the globe. From Karaoke booths at shopping malls in Minnesota to hundreds of tiny Karaoke bars dotting the landscape in Thailand, Karaoke has become an accepted and beloved form of entertainment for young and old, rich and poor.

Whether you’re looking to bring the fun into your house so you can have it handy for big parties or to ramp up the energy at your club, a karaoke mixer amplifier is an essential equipment.

Below We Present The 5 Best Karaoke Mixer Amplifier Reviews

Pyle is a respected name in audio so you can be sure they’re not going to sully their reputation by putting out the second rate anything; including karaoke amplifiers. True to form, the PT265 BT is a quality piece of audio equipment that will allow you to stream wireless audio from your mobile phone, tablet or PC via Bluetooth. You also have the option to attach your CD player or another device through the system’s aux inputs. The PT265 BT also features an AM/FM radio you can use as source audio to really broaden the scope of your karaoke escapades. Some of the unit’s features include:

If you’re looking for the perfect way to upgrade your home entertainment center the PT265 BT will turn even the most mundane basement or moribund living room into the beating heart of your home in no time flat.

Like the PT265 BT and other systems on this list, the Hisonic MA222 is defined by its versatility. Turn any CD+G player, DVD, PlayStation or other game consoles instantly into a karaoke machine with the MA222. What’s more, is that you can also use the MA222 as a powerful amplifier by just toggling the “player mode” switch. Here’s a shortlist of just some of the MA222’s features:

Perhaps you’ve wanted to upgrade your home entertainment system with karaoke capability but thought it would be too costly and complex. Well, there’s no need to worry anymore because the MA222 connects simply and seamlessly between your DVD player and the rest of your system. Just as quick as that your home entertainment possibilities have expanded exponentially and next time there’s a party no one will ever be at a loss for something to keep the crowd happy. Retire your Trivial Pursuit board once and for all with the MA222. All in all a real party starter. 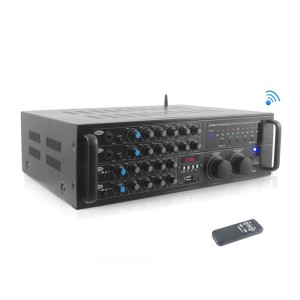 For the next entry on our list we head back to Pyle for their PMXAKB2000 (Say that 3 times fast!). This clumsily named karaoke amp is anything but clumsy when it comes to performance. Like its cousin, the PT265 BT the PMXAKB2000 (Can we just call it ‘the 2000’? Great) features Bluetooth wireless technology that enables wireless streaming for various devices. Some of the features of this incredible karaoke amp include:

This is a rugged, well built, extremely versatile unit. This rack-mounted amp will have DJs raising their hands to the sky and party animals singing its praises in no uncertain terms. Power up your laptop and stream your music library to 2000 instantly. Same with your smartphone or tablet. Have a USB device that’s overflowing with downloaded music? Pop it into 2000 and rock with them like never before.

This karaoke sound mixer doesn’t straddle the line between home entertainment and serious professional kit; it obliterates it. Adjust the key of your source music using the built-in 9 steps digital controller. A real lifesaver for those whose voice is not necessarily versatile (which is just about everybody!) If you still need to treat a voice just a bit to harness its potential, use the effects loop input to connect an outboard effects processor. Your singer will be ready for their Grammy Award before the song is over.

The mixer on 2000 has 2 mic inputs along with a pair of line inputs for source devices. If you have video content you want to watch while singing 2000, you can also connect your DVD/VCD (does anyone use VCDs anymore?) player and ramp up the ambiance while your budding pop star gives it her all. 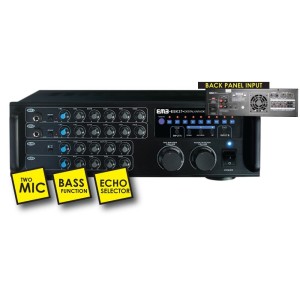 The EBK37 Pro Karaoke Mixer Amp by EMB is a great little amp. Actually, at 700 watts it’s not a little amp at all as you’ll find out in a hurry if you hook it up to a pair of serious speakers. It’s no exaggeration to say the EBK37 is one of the best under $200 karaoke mixer amplifier units you can buy with blue sky sound that’s free of noise even when cranked to the max, a deep, resonant bass that’s never buzzy and crisp, clean treble. Some of the many features of the EBK37 include: 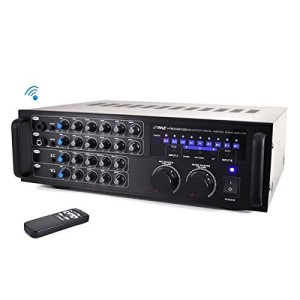 Once again we return to the “Pyle”. This time with the PMXAKB1000 (from here on out ‘the 1000’). Like its counterpart with the equally ill-advised, consonant-blizzard of a name 1000 boasts Bluetooth technology allowing you to effortlessly access all those songs you have stored on your mobile phone, desktop computer or tablet. 1000 really kicks out the amps (1000 as the name implies) with 500 on each channel at 4 Ohms. Features include:

After having lavished so much praise on this unit’s big brother in our review above, it’s hard to find something new to say except that many of the same superlatives apply to 1000 as applied to 2000. Both expand the horizons of the karaoke experience; both are built to last and both have adequate power to live up to the expectations of even the most demanding DJ.

With a PMXAKB1000 you won’t just be the life of the party, for all intents and purposes you’ll be the party. So whether you’re looking for that killer piece of entertainment tech that will shift the landscape of parties with family and friends or you need a serious mixer for karaoke that will send ravers into a frenzy, 1000 is your best bet. Make the 1000 part of your entertainment focus and take advantage of ridiculous prices at the moment.

Unless you’re dripping in the dough and can afford to make plenty of mistakes, you’ll want to have some idea regarding what to look for by way of choosing the best karaoke mixer amp for you, your home or your fledgling entertainment venue. Below we’ll go into a number of things you’ll want to keep in mind before laying down your hard-earned on a karaoke amplifier mixer. Not every item will be relevant to every situation but just keep an open mind and stay focused on those things that do apply to you.

The right karaoke mixer amplifier can add several levels of enjoyment to your home or club entertainment capabilities, but you should be wary about jumping at one just because it’s being offered at an attractive price. Read reviews and measure the system’s capabilities and compatibility with your existing entertainment hardware. There are so many karaoke systems available today that you don’t have to settle for the first one that comes along.

Any of the 5 systems reviewed here will do you proud and represent a worthwhile investment from our perspective. Of course, you may have something entirely different in mind, but if it’s value and performance you seek, you should strongly consider one of the above. There aren’t thousands of dollars on the line, but money is money and money wasted can’t be unwasted. The bottom line takes your time, compile a list of those features you want, as well as any compatibility issues that may be relevant and then make an informed decision based on what you’ve found.

We hope you found this review of the best karaoke mixer amplifier systems helpful and be sure to mention us to a friend.