When you want a home karaoke system for residential use, we’re talking about a capable machine that will play all your favorite tunes that you can sing along to. These are the types of machines that will be sophisticated enough to use with a gaggle of friends in the living room or for a family sing-a-long, rather than a more basic one for a young child or only in the confines of their bedroom.

A karaoke machine is ideal for people who love music and find themselves singing in the shower or bath without even realizing it. If this sounds like you, then you’ll be in for a real treat. With a microphone in hand and the lyrics to help you along, you won’t have memory failures and find yourself humming when you forget the words.

Each system is different, so we have reviewed 5 good ones which offer a variety of designs and features to suit.

The Memorex MKS-SS2 SingStand 2 is the latest version of this mic on a stand Karaoke system. It’s designed far differently than other machines because it is a stand, with the base holding the push button controls and the microphone in a mic holder at the top.

There’s a speaker with a useful amplifier in the base unit to blast out your songs as you sing them. Two 5-watt speakers in the base provide the sound. Thankfully, there are a few free songs are included too. 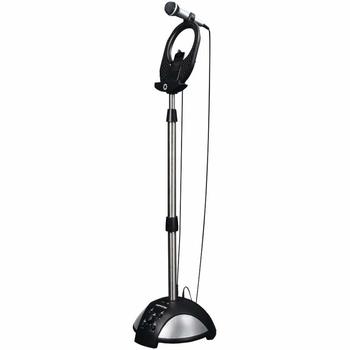 Below the microphone holder is a slot to fit an iPhone. Once slotted into place, there are LEDs to confirm it’s connected up. The karaoke player can then use the songs on the iPhone and play them, including the lyrics. The iPhone is held in portrait orientation, not sideways in the landscape which makes it a little more difficult to read the lyrics. However, there is a shelf right below the iPhone holder, to have a tablet sitting in landscape orientation providing more lyrics and a bigger screen to read them off.

Auto Voice Controls here help to sound better. When singing over an existing singer’s voice, the AVC will dampen their voice to let yours shine through. There are various adjustments to voice and sound available in the base unit.

For practice band sessions, there’s input jacks for a guitar and electronic keyboard.

The Singtrix Party Bundle Premium Edition (SGTX1) is another karaoke system on a stand, but this time it’s perhaps a little better designed. The company has been previously featured on Ellen, SharkTank and the View, so it’s certainly done the media rounds.

The tri-stand is sturdy. It has to be because it holds the mic in a holder at the top, a metal shelf for a smartphone or tablet attached on the left side and a colorful control panel in the center, within arm’s reach. The mic boom arm extends out in front of the unit some distance, so it’s not necessary to stand immediately in front of the stand and the equipment. 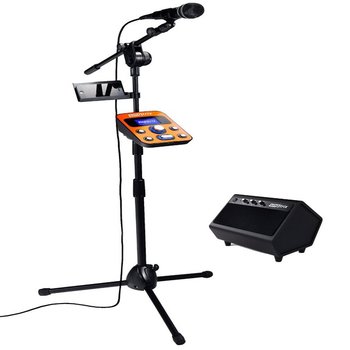 There’s a separate speaker on the floor. It has several controls to adjust its sound. The speaker is Dolby 2.1 for good sound separation; it’s not fully 5.1 or 7.1 surround sound, but that would require a multi-speaker arrangement beyond the scope of this product. There’s a sub-woofer in there to deliver some deeper bass sounds that is pleasing.

The orange console is situated at waist height and provides effects controls for echo, HardTune (auto-tune system), pitch adjustments and other settings. There are over 300 effects to pick. The pitch correct system helps to gradually improve your voice on the mic.

The supplied microphone works with harmonies and the system can accept a second microphone too.

The Singing Machine SMC HOME Wi-Fi and Bluetooth Home Karaoke System look more like a Google Mini device than a traditional karaoke machine. We suspect this was exactly what Singing Machine was going for here. It’s certainly a beautiful aesthetic.

The machine works on a Wi-Fi connection or Bluetooth and in so doing, it links up to a smartphone, tablet or a TV that’s Wi-Fi enabled which most are these days. If can play as many as 10,000 Karaoke videos in Full HD quality, along with YouTube videos and CDG tracks. Most will come with the lyrics showing on the screen too. The device can play songs on Spotify and Pandora. 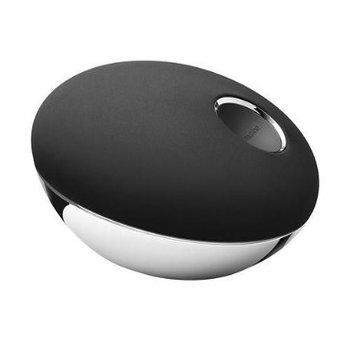 There’s an HMDI out to connect from the device to the TV.

There does admittedly seem to be a problem with this model. Connecting via Bluetooth seems to be highly problematic. Accessing and using YouTube videos to sing along to doesn’t work as well as one might hope. The quality of the supplied microphone isn’t as good as some customers would have liked either. And getting the system to hook up and function as intended is rather hit and miss.

The unit comes with its base, two microphones, but no speaker or amplifier.

All information and instructions are in Korean, making this a challenge for some buyers unless they have a friend who reads Korean. 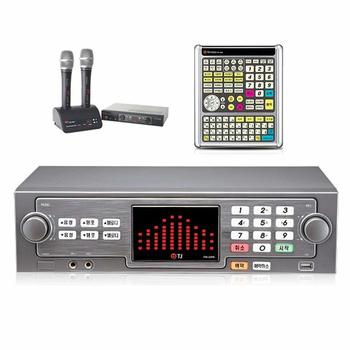 The two supplied microphones come in a separate upright stand with controls and power for charging.

There’s a 500GB hard disk drive ready to play HD video tracks. Included in the package are around 33,000+ songs from a range of Filipino, Korean, Japanese, K-Pop and Japanese singers and groups.

The control system includes the ability to remove feedback, an echo/revert feature and a 7-band equalizer to adjust the sound quality and levels. A remote control is also included to change settings from a distance.

Connection to other devices is primarily made via Wi-Fi connection. The device can stream via a USB connected device like a computer or an Android phone. It’s incompatible with the iPhone and iOS devices or wireless streaming.

The VocoPro DVD-SOUNDMAN Basic Home Karaoke System looks more like a traditional old-school karaoke machine. It is a sophisticated all-in-one system with an 80-watt, 4 speaker system setup that should be plenty for home use.

There’re 2 x Mark 6 corded microphones included in the package. However, the instructions thoughtfully advise how to add a wireless mic to the system and ways to make it compatible with that too. 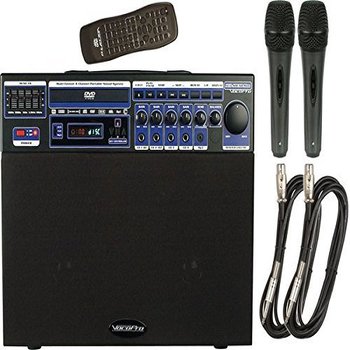 Controls on the top front of the unit control gain levels on each channel. Effects like echo/reverb are controllable from the capable remote control.

The machine can play DVDs, CDs, CDG and MP3 tracks. It will work anywhere in the world and plays on the American NTSC TV system and the widely used PAL system format in the rest of the world.

There’s a 5-band graphics equalizer to adjust the sound output and get the balance right.

A 1/8th input socket for connecting up MP3 players.

Not every karaoke system has the same features. It depends on how professional-oriented the system is and where adjustments were made.

For instance, sometimes a user is expected to hook their smartphone, tablet or TV to the device to act as a portable screen. Other times, external speakers can be added on.

Here are some features to look out for:

For a home karaoke system, the focus should be the quality that you need. Also, consider whether a karaoke machine in a stand or a base unit is the preferred design. Some machines are more portable than others. If all your music is on a smartphone or you intend to access tracks from YouTube, then you’ll need a USB and internet access to the device. Check the machine can connect to a secondary display, even if it comes with its own display which is increasingly unlikely now.